28% Of Kids Use Tablets Before They Learn To Talk 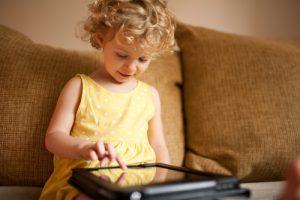 You know you´re getting old when a toddler teaches you how to use an iPhone.

But it´s what we´re facing – a digital world where kids can master electronic gadgets from a very early age. According to a new study I came across by non-profit organisation Common Sense Media, almost one in three children learn how to use a digital device like a tablet or a smartphone before they can even talk.

Are parents tablet-training before they potty-train their toddlers?

In most western countries, mobile Internet-connected devices can be found in almost every household. As a result, children are exposed to such devices on a daily basis. Because of their visual nature and propensity for fun, children are attracted to tablets. By the time they are old enough to start school, 70% of them have already mastered the use of these gadgets.

By the age of nine, an average child has already sent 116 text messages and 85 e-mails, the report from Common Sense Media reveals. These figures may seem shocking, but the majority of parents believe that their children benefit from early access to digital devices. Still, safety remains their main concern, with 57% of parents citing it as a problem.

Overall, the survey found that 38% of toddlers aged two and under have used devices such as smartphones or Kindles to watch films or play games. Just two years ago, this figure stood at 10%. However, experts say that depending solely on devices as a means for entertainment may be doing children harm, and that those under the age of two should have no screen time at all.