Facebook Reactions Off To A Slow Start – Is it Any Great Surprise? 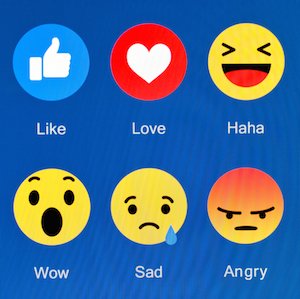 Well, that didn’t go too well. We had hoped Facebook’s Reactions would allow us to find out what our customers really think of our content. But that would only be possible if users actually used the new buttons.

Since February, Facebook users in the UK have been able to mark a post with “love”, “haha”, “wow”, “sad” or “angry”, in addition to the traditional “like”.

However, research by social media analytics software company Quintly showed that Facebook’s new Reactions are rarely used in comparison to the tried-and-true “like” — regardless of audience size.

“On average Facebook Reactions have low significance,” the study reported after announcing 76.4% of posts analysed were Liked compared to another interaction.

Of the remaining 23.6%, 14% of interaction studied were shares and 7.2% were comments — leaving a small 2.4% “Other” to include the five new reaction options.

“Until now this was not an easy task as irony or sarcasm were hardly measurable. Facebook Reactions analysis enable businesses to identify this at a glance,” the report reads.

At least that was the hope. However, with only a handful of Loves etc. to work off, it’s difficult to make an informed decision.

Have Reactions proved to be a failure?

I guess you can still distinguish the good from the great when it comes to your content, depending on what posts have received the most Loves. However, we had expected to build a clearer picture of exactly what type of content is hitting the spot and inciting reactions, allowing us to create more content of that ilk.

It goes without saying, though, that we shouldn’t just shrug and hope that our customers, sooner or later, get on board with the Facebook Reactions.

Let’s see if we can find a way of getting customers to use the new buttons more regularly as they go about engaging with content on Facebook.

It won’t be easy, of course, given that social media users can be slow to come round to platform changes, and the fact that the “like” button, more often than not, suffices as a means to engage with content.

It’s also unrealistic to think that we’re ever going to see customers hitting the “wow”, “sad” and “angry” buttons, isn’t it? Honestly, what content have you produced recently that would be fitting of such a response? None, I’d guess.

However, there’s hope to be found in the “love” and “haha” buttons. There’s no reason we can’t create content our customers will love or that makes them laugh. You might even make a case for being able to create content that wows people, although that’s pretty tough in today’s content-heavy world.

For the time being, then, let’s see if we can get our customers hitting “love” and “haha”. Achieving this will not only make for a better sentiment analysis and more accurate insights, but more engaged customers.