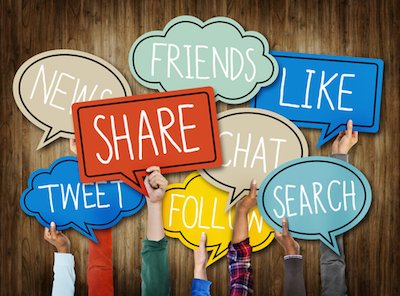 At the start of every year you´ll see swathes of marketers, us included, make their predictions on how marketing will take shape in the 12 months ahead. But we rarely revisit such pieces at the end of the year to applaud or point & laugh at their authors.

You can see where I´m going with this, so without further ado, let´s take a look back at what we and others have seen appear in our crystal balls in the past few years, alongside the reality of what actually came to be. You can rest assured we won´t leave out the awfully misplaced predictions.

Social media marketing is an ever-spinning sphere, which can make future-gazing that little bit trickier. Developments tend to happen at such speed, early-year predictions can appear pretty conservative come December. At the same time, however, that makes the endeavour of prophesying all the more fun.

Social Media Examiner is always a good place to start when it comes to revisiting predicted trends, as it asks a great number of its contributors to foretell what they see happening in the industry in the year ahead.

Somebody who was on the money back in January 2013 was Mark Schaefer, who said that Instagram would play a greater role in the years to come. If the fact that “Instagrammers” has now become a part of many web users´ lexicon isn´t enough evidence to categorically say Schaefer was correct in his assertions, then news that it has overtaken Twitter with 300 million active users certainly is.

Perhaps Instagram´s success can be attributed to the idea you can tell so much with a single picture, meaning brands are able to get their message across to their audience in an expressive and creative way, whilst not asking too much of them. Facebook, for example, still relies heavily on text and the written word – and we all know what has happened to attention spans.

From the same piece, Stephanie Sammons was also correct to say that more industries are going to get serious about social. Now you´d be hard pushed to make an argument against a brand from any sector taking to social media to generate some engagement. Here at M2 Bespoke, we´ve welcomed firms from almost every “serious” sector, who are reaping the rewards of ramped-up engagement.

What are the reasons for this change in mindset? Well, businesses are no longer constrained to one or two social media platforms – they can now pick from a good handful and jump on-board the one which best aligns with their audience. Many of our financial-based clients, for example, concentrate on posting to LinkedIn, where advisors and entrepreneurs are likely to spend a fair amount of their time.

Last year, John Haydon showed himself to be something of a visionary when he suggested that Facebook would come down hard on brands prone to spamming their followers (you can read more about it here). Posts that shout “Buy me!” have slowly been sidelined over the last 12 months, as have brands that simply reuse the exact same content from their ads.

Facebook even took the time to comment on the matter, saying the move towards more creative content will lead to an increase in the “relevance and quality of the overall stories – including Page posts – people see in their News Feeds”. Its message at the time was clear: get creative or lose out.

The Bad (and the ugly)

However, not all predictors have been able to hold their head quite so high. Even some that have just been made for this year have already been shown to be a little misguided. Jayson DeMers, writing for Forbes, will probably get plenty of things right this year, but his prediction that we´ll witness the rise of Ello is not likely to be one of them.

After some initial buzz, the ad-free social network alternative is not making waves as it was suggested it would. That´s not to write it off completely, though – it´s said to be quite content with being something of a welcome retreat from Twitter and Facebook. With that, Vice magazine recently called it the “nice small town of the internet”, with a strong core of regular users. Like some small towns, however, it gives the impression that not everybody is welcome. Not ideal for a social network, we´d suggest.

Ello´s arrival, I guess, makes Chris Garrett´s 2013 prediction in Social Media Examiner right to an extent – he anticipated that this new social site would seize a spot in the marketplace. However, Instagram (2010) and Vine (2012) are still the last ones to have confidently strode through the door… so, sorry, Chris – but you´re going have to stay in the ´Bad´ pile for now.

He´s in good company, though, with Social Media Examiner founder Michael Stelzner also chosen for a special mention. Back in 2013, he predicted that the number of podcasters would double. Now, I don´t know about you, but even the term “podcast” itself seems a bit dated to me. It´s all about video now, isn´t it? And we´d suggest it has been for some time.

Don´t get me wrong, I enjoy a good podcast as much as the next man – counting myself a regular listener of Kermode and Mayo´s Film Review on BBC Radio 5 Live – but for brands they rarely have the desired effect. It´s little surprise really, given that video can do all a podcast can and more. Video only looks set to put podcasts further in the shade too (count that as one of our predictions, if you like), given that 70% of marketers are now using videos in their marketing strategies, according to Demand Metric.

We do hope that those who find themselves in the paragraphs directly above this wrap-up don´t feel like they will give the ol´ predicting game a swerve next year – it proves to be a whole lot of fun, and more often than not very useful. In fact, in order to coax you back out again, we´re prepared to be a little more adventurous in our 2016 predictions come December, though we think we were fairly star-gazing in our 2015 predictions to be perfectly honest! Please just promise not to scrutinise us if we are a little wide of the mark.